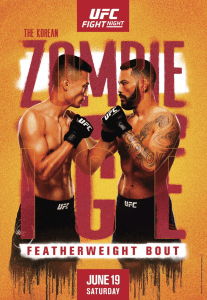 UFC Fight Night: Chan Sung Jung vs. Dan Ige is all set for this Saturday night. The prelims and six-fight main card will be broadcast live, across the world from the UFC Apex in Nevada.

The headline bout is the featherweight showdown between Ige and Jung. The contest all but promises to be an epic. Ige is fresh off the back of a 22 second KO win vs. Gavin Tucker at UFC Fight Night: Edwards vs. Muhammad. But the Hawaiian native’s fights have gone the distance in six of the ten bouts he’s had inside the Octagon.

They don’t call Jung the Korean Zombie for nothing: his last fight, a five-rounder vs. Brian Ortega ended in a U-DEC loss. But, Jung does have a genuine KO power in his hands – just ask Frankie Edgar and Renato Moicano! It’s hard to wedge a dollar between these two combatants.

Besides the main event, there’s plenty of other top MMA action to come, including on the preliminary card when light heavyweight prospects Aleksa Camur and Nicolae Negumereanu duke it out atop the pile to see which man has to suffer the second loss of his pro career.

Get ready for a great night of fight action inside the Octagon. And, if you’re looking for fight predictions and betting picks, read on as we cast an eye over Jung vs Ige, the five other bouts on the card, and deliberate on the latest odds available @ the UFC’s official betting partner, DraftKings.

There’s barely an MMA fan on this planet who doesn’t love and respect the Immortal one, Matt Brown (24-18).

The Ohio-born veteran of the Octagon holds wins over the likes of Stephen Thompson, Tim Means, and Diego Sanchez. And his willingness to stand and trade despite the fact he can boast a brown belt in Jiu-Jitsu and Judo has always endeared him to UFC fans.

Brown’s opponent Dhiego Lima (17-8) is eight years his junior but is returning to the Octagon after a tough loss to Belal Muhammad in February. The Brazillian was outfought and outstruck in a three-round, largely onesided, welterweight clash.

Brown is coming off the back of two straight defeats: a tough KO loss to Miguel Baeza and, more recently, a U-DEC defeat vs. Carlos Condit, so both men will know a W is essential on Saturday night.

At 40 years of age and with all the wars behind him, it’s hard to imagine Brown really turning it on in this one. However, Lima punches less per minute, punches with less accuracy, and absorbs a significant amount more punishment than his game American opponent. So we think an upset just might be on the cards…

We’re going against the oddsmakers on this one – Brown by TKO in the third round.

Wellington Turman (16-4) vs. Bruno Silva (19-6) is the next fight on the card. Turman is slowly earning himself a reputation as a submission specialist, whereas Silva is more known for his ability to shut the lights out on his opponents.

Turman has won eight of his last 11 fights (4 by rear-naked choke) but did suffer a KO defeat at the hands of Andrew Sanchez in his last outing some ten months ago. The BJJ expert will be aiming to avoid going 0-2 for the first time in his career.

Making his UFC debut, Bruno ‘Blindado’ Silva has won five of his last six fights but hasn’t fought in almost three years. Nobody is doubting the man’s knockout power – he’s made a career of it! And it’s worth noting that Blindado has never been knocked out himself. However, it’s on the mat where the debutant has had issues over the years: he’s been submitted five times.

What this all means is that it’s a classic MMA bout between a grappler and a striker. On the feet, you’d have to fancy Silva. On the mat, Turman has the edge.

Honestly, this is a tough one to call. But stepping into the Octagon after a three-year layoff is a big ask for Blindado and I like a plucky underdog in this kind of contest. So, Turman to win by submission in the second round.

Julian Erosa (25-8) takes on Seung Woo Choi (9-3) in the third fight of the evening. Erosa enters this bout having won two on the trot: an outstanding, performance of the night win vs. Sean Woodson almost a year ago, followed by a flying-knee KO victory over Nate Landwehr after just 56 seconds earlier this year.

Erosa has finished 22 of his 25 career victories and is adept-good in most martial arts disciplines. He’ll be a tough task for Seung Woo Choi, make no mistake about that.

That said, Choi has won four of his last six career fights, including two straight inside the hallowed UFC Octagon. The Korean’s Muay Thai is unquestionably first-rate and his ability to volume strike but with power should prove a stern test to Erosa.

In a straight Muay-Thai bout, Choi would take a win. However, we reckon that Erosa may be the slightly more well-rounded and complete MMA fighter…

Coming into this pivotal bout as the underdog, we’re backing the American on home turf.

Marlon Vera came up short in his last bout vs. the former long-standing featherweight champion Jose Aldo back in December. There’s no shame in losing to a legend like Aldo. But reports indicate the Ecuadorian has gone back to the drawing board for this next bantamweight fight against English-born Davey Grant. So expect to see plenty of Chito’s famed black-belt Brazillian Jiu-Jitsu on show.

Davey Grant has punched his way to a three-fight win streak, including KO wins vs. Martin Day and Jonathan Martinez. The Englishman certainly has the power to get Vera out of there but does have a habit of gassing himself out and will need to be on guard against Vera’s swiping leg kicks to get the job done.

This fight should be a real barnburner but, as such, is a tough one to call. It’s all going to come down to whether or not the Englishman can connect before his lead leg is too bruised up to generate the power he needs to land his KO blow.

Let’s go with the puncher’s chance: Grant by KO in round two.

Aleksei Oleinik (59-15-1) has been on a bad run of form recently. The Boa Constrictor is without doubt a legend of MMA. But rough KO defeats to Derrick Lewis and, more recently, Chris Daukaus signal to us that perhaps the Russian veteran is ebbing towards the end of his career. Another loss to Spivak could signal the end.

Sergey Spivak (12-2), on the other hand, has won two fights on the bounce and will come into this bout with Oleinik high on confidence.

Both men are capable of submitting the other. Spivak has the strength to crank even the Boa Constrictor’s neck, and there’s a concern for the Russian veteran if this fight stays standing for too long: Oleinik’s defenses have been found wanting during recent trips to the Octagon.

However, Oleinik has 48 career wins by submission – that’s no mean feat. On nothing more than gut-feeling, we reckon he winds the clock back one last time…

Oleinik by submission in round three.

Chan Sung Jung, better known as the “Korean Zombie,” is is the No. 4 ranked featherweight in the UFC. Jung was knocked down twice and did suffer defeat in his last bout against Brain “T-City” Ortega. But he is a game opponent for anyone in the division, as evidenced by his high ranking. When the Zombie gets going, sparks fly – the crowd loves the man.

The Zombie will almost certainly want to continue his habit of eating shots to land his own come Saturday night. So, Dan Ige should expect a war in this one!

Dan Ige is ranked as the No. 8 featherweight in the division and most recently bested  Gavin Tucker in just 22 seconds back in March. The Hawaiian native combines high-level grappling and jiu-jitsu with accurate striking so should be a real test for his Korean opponent.

DraftKings has this bout dead-even; it’s near impossible to call. But that’s the UFC for you – that’s why it’s SO good.

On a whim and because we are fanboys, we’re going with the Zombie. But, honestly, this fight. is anyone’s guess – just enjoy it!

…And if your lust for betting still isn’t fulfilled, click here to read David van Auken’s excellent tips on the upcoming BKFC Championship on June 26.