Read on for a complete preview of each bout on the main card. Plus, we unravel the latest DraftKings odds and give our predictions for each fight.

The hype for this probable title eliminator fight is real! ‘Tarzan’ Sean Strickland (23-3) is all healed up; in the midst of a four-fight win streak, and his propensity to stand and bang is winning him fans in all corners.

Last up, Strickland outclassed and outpunched a resilient Krzysztov Jankto to claim a win by way of the judges’ scorecards. Another win on Saturday means Strickland, currently ranked No.11 at middleweight, is likely to leapfrog opponent Uriah Hall (ranked No.8) into the top 10, putting himself in the mix for a shot at championship gold somewhere down the line.

We haven’t seen Uriah Hall (18-9) since that tough TKO win vs. Chris Weidman at UFC 261 – remember that one; the one when Weidman’s leg broke in half after Hall checked his kick? Well, as hard as it was to watch, a win is a win in the MMA game, and Hall himself exited Vegas unbeaten in four, a streak that’s included KO wins over two former UFC middleweight champions – the aforementioned Weidman and ‘The Spider‘ Anderson Silva.

Prediction: both of these men like to trade in the stand-up exchanges but, stylistically, they are worlds apart: Hall is a karate and jiu-jitsu specialist. His rangy, stinging strikes come at awkward angles and pack plenty of snap – Hall averages 3.34 significant strikes per minute, landing with 51% accuracy. If Hall can keep Tarzan at range and pick at him, he’s got every chance of winning this fight and edging himself ever nearer to that dream clash with current middleweight champion Israel Adesanya.

Strickland, on the other hand, is more of a traditional MMA striker, but he brawls like a high-output boxer, averaging over 5.0 significant strikes per minute. With 39% striking accuracy, he’s not as crisp or as clinical with his limbs as Hall. But Strickland is the kind of guy to just wear on his opponent with flurries, often using superior cardio and good old-fashioned brawn to take Ws.

A fight between two elite-level strikers such as this pair is hard to call, but Hall has been known to struggle against opponents that keep the pressure on. So, for that reason alone, we’re taking the favorite and putting some cash on Strickland. 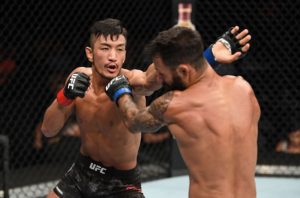 After doing away with Teruto Ishihara, Brandon Davis, and Liu Pingyuan in recent bouts, Kang is seeking his fourth straight win inside the Octagon. In these most recent bouts, the Korean has shown that he’s much more than just a grappler. His jab has been on full display, he moves with rhythm and intent and will enjoy a slight reach advantage come Saturday, which could be pivotal – especially if he can keep Yahya at arm’s length.

Standing across from ‘The Gentleman,’ Yahya will need to bring his jiu-jitsu A-game to the APEX since he’s unlikely to find much consistent success on the feet. Not only is Kyung-ho longer, but his speed is also superior.

Yahya has been a staple MMA competitor for years, mind, And, if his track record has taught us anything, it’s that one slip-up is all it takes for him to synch in a submission. So, his Korean opponent will need to be on guard for the full fifteen, or run the risk of being the 12th submission win on Yahya’s record.

Prediction: Yahya will always have a chance on the mat because his submissions and jiu-jitsu are so high-level. But we think he’ll have issues closing the distance up against Kyung-ho’s rangy jab and superior speed. Kyung-ho to win via TKO in Round 2.

This women’s strawweight clash sees 5-2 Cheyanne Buys go up against a closely ranked competitor with a very similar record in Gloria de Paula (5-3).

Both fighters are capable strikers who are content to stand and trade in the pocket. Both connect with about half of the strikes they attempt. The difference is that Buys throws more fire out there. She connects with 4.10 significant strikes per minute to de Paula’s 3,33. If the fight stays on the feet, you’d expect Buys to seize the advantage the longer the war rages on.

That said, de Paula is no slouch. She’s very tough to take down; effective on the mat, and capable of pulling off submission victories. If de Paula can drag Buys into a more technical contest and use her experience to grind her down in the clinch and on the canvas, she has a big chance of heading home at 6-3.

Prediction: this is a tough fight to call between two very evenly matched combatants. Honestly, we’re staying away from this one. But, if you’re determined to open a parlay for the whole UFC Fight Night event, you’d just as well take de Paula as an underdog.

When Mounir Lazzez was denied his first UFC appearance due to VISA issues, Jared Gooden (17-6) jumped at the chance for another shot inside the Octagon. Gooden has fought twice in the UFC, but both bouts ended in tough defeats to Alan Jouban and Abubakar Nurmagomedov, respectively.

We haven’t seen Niklas Stolze (12-4) in the Octagon for some time either. In his last appearance, he ended up getting predictably rag-dolled by Ramazan Emeev at UFC Fight Night 174. But his record suggests he’s much better than he was able to showcase that evening.

Both of these men are capable strikers and both are likely relishing an opportunity to test themselves on the feet this time out.

Prediction: ability-wise, there isn’t much to separate these two combatants – Stulz probably throws sharper and more accurate kicks; Gooden looks to pack more power in his fists. The oddsmakers make Stulz the favorite, however, due to Gooden’s undoubtedly hasty camp, and we’re inclined to agree. Stulz to win via TKO in Round 3.

Besides a great win over Sergio Pettis a few years ago, Ryan Benoit (10-7) has struggled for consistency in the flyweight division. He comes into this fight having lost two on the bounce and badly needs a win on Saturday night

Zarrukh Adashev (3-3) boasts a stellar record from his time as a kickboxer and brief stint at Bellator. But like his opponent, Benoit, he’s on a two-fight losing streak since joining the UFC; a streak that includes a rough KO defeat to Tyson Nam. Adashev is also in dire need of a big W.

So what we have is a fight between two men desperate to stay relevant within MMA’s elite organization. And it’s for that reason that this one is our betting pick for the Fight of the Night.

Prediction: Adashev, a southpaw kickboxer, is likely to want to attack Benoit’s legs and body, while aiming high with kicks from time to time. A potential highlight-reel knockout could be on the cards if he can get Benoit to drop his hands.

Benoit is more of a traditional MMA striker, capable of mixing things up with the dirty boxing and Muay-Thai. As such, he’s likely to want to get into closer range to deal damage.

It’s another tough fight to call. But we think Adashev’s superior experience and pedigree should be enough to get the job done. As such, we’re wagering on the Russian by TKO in Round 2 (and just hoping for the best).