UFC 264 is all set for Saturday night at the T-Mobile Arena, Las Vegas. The headline bout: Conor McGregor vs. Dustin Poirier, the trilogy fight!

Both men are capable of finishing their opponent – McGregor has a first-round KO win over Poirier at featherweight from UFC 178 (2014). At lightweight, however, the Louisiana native is an entirely different animal. McGregor discovered this first hand when Poirier returned the favor at UFC 257 in January, punching the near one-legged Irishman to a pulp in round two to square the series.

With Khabib Nurmagomedov now retired, the winner of the trilogy bout is all but guaranteed a shot at the current UFC Lightweight Champion, Charles Oliveira, who will be at Octagon-side.

Read on to get all the latest news, our best betting predictions, and DraftKings odds for each fight scheduled on the main card, beginning with… 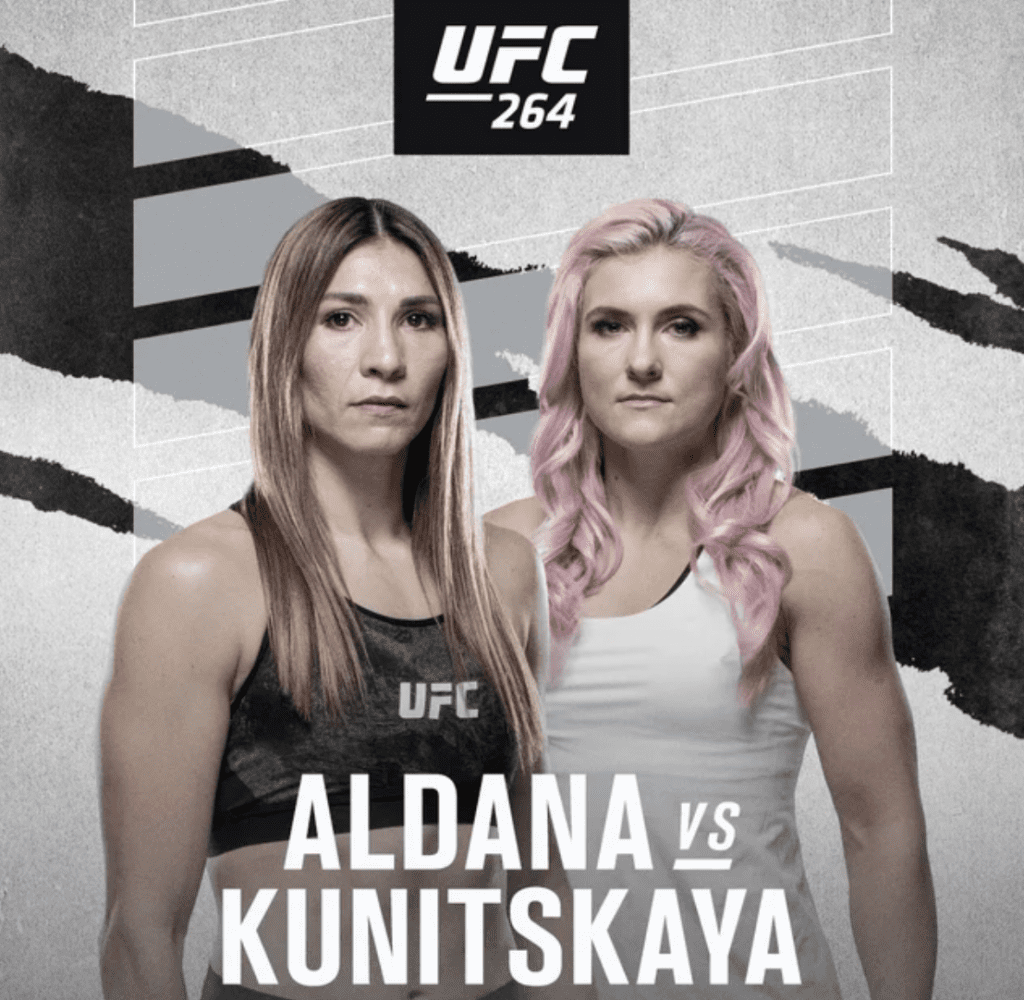 Irene “Robles” Aldana may have suffered defeat to Holly Holm in her last Octagon appearance, but the No. 4 ranked women’s bantamweight fighter proved herself to be an elite level boxer in that fight and still a worthy contender for the strap in the division.

A former Invicta 135lbs champion, Yana “Foxy” Kunitskaya is ranked at No.5 in the women’s bantamweight division and has gone 4-1 since being knocked out in the first round vs. Cris Cyborg in her promotional debut.

Kunitskaya has excellent taekwondo and Muay-Thai; certainly, enough to give “Robles” some problems to contend with in this one.

The oddsmakers are struggling to separate the pair, making Aldana the marginal favorite likely due to her slightly superior ranking. But we’ll take the underdog in a fight as well matched-up as this one is.

Kunitskaya to win via the scorecards.

When Lois Smolka was forced to withdraw from this fight vs. “Suga” Sean O’Malley (13-1), there was a murderer’s row of top fighters willing to step in, including the fight we wanted to see: O’Malley vs. Merab Dhvalishvili.

Instead, Kris Moutinho (9-4) has come over from the CFFC for his first fight under the UFC promotional banner. Moutinho is a wrestler who likes striking and holds three KO wins on his record, so he’ll likely provide a sterner test than many expect.

That said, “Suga” is an elite striker and he’s shared the Octagon with and slept better fighters than Moutinho has in his young career. It’s surely just a matter of time before O’Malley lights up his opponent and takes a W – we think a third-round KO simply because the Arizona native may want to give the crowd their money’s worth.

On the betting lines, however, there’s no value in an O’Malley win on the moneyline. We’re henching our round/method of victory pick on O’Malley by backing the underdog to cause a shock, despite the chances of it being slim.

Tai Tuivasa (11-3) and Greg Hardy (7-3) are two sides of the same coin: they both like to stand and bang – that’s where they’re most comfortable and I’d be astounded if this fight goes in any other direction.

A disciple of the Mark Hunt school of hard knocks, Tuivasa is capable of delivering vicious strikes with all limbs and is, in our opinion, the better technical striker.

Hardy has the power – he’s a big heavyweight, and to come out on top in this one, we feel he’ll need to use his size, perhaps try and get a couple of takedowns to sap some life from Tuivasa, who isn’t at his best on the mat. If Hardy can do that, this one could go the distance…

But we think the betting favorite Tuivasa wraps it up early on the feet. Tai to win by KO in round two.

After rebounding from a tough 1-3-1 streak that included close losses to Tyron Woodley and Darren Till, “Wonderboy” Stephen Thompson has returned to form, picking up big wins against young up and comers Vicente Luque and Geoff Neil. Another win at UFC 264 could see Thompson thrust back into title contention, especially since Colby Covington and Saturday’s opponent Gilbert Burns have both tasted defeat at the hands of current welterweight champion Kamaru Usman.

Burns has the weapons to trouble Wonderboy’s evasive kickboxing style though: the Brazillian has great jiu-jitsu and, packing plenty of power, isn’t afraid to stand and trade, or to eat one to land one either.

As a consequence (along with the Niko Price vs. Michel Pereria bout on the undercard), this one has to be considered a fight of the night contender.

Thompson can strike from just about anywhere. The American has come up against perceived stronger opponents with better wrestling and jiu-jitsu before. Though Wonderboy hasn’t always come out on top on the judges’ scorecards, he’s never been embarrassed either. On the other hand, we’re not sure Burns has ever faced such an elite-level kickboxer as Wonderboy, and that’s why we’re backing the favorite for this fight.

Thompson to take a W via the judges’ scorecards.

Conor McGregor entered the last bout between these two men as the consensus agreed betting favorite, and for good reason! McGregor has never been knocked out in the Octagon and held a first-round KO over Poirier from their time in the featherweight division some seven years ago.

But the Irishman’s crossover to a total boxing stance since the Mayweather fight, with all that weight on the lead leg, worked against him. McGregor still had the power to trouble Poirier. He definitely had Diamond in a rough spot during the first round of that second fight when he connected with a sweet 1-2. But Poirier chopped McGregor’s leg out from under him with a nasty calf kick, and from then on was in the ascendency. It was little surprise to see the immobile Irishman put away in the second round – McGregor couldn’t move.

But that was the last fight. To win this third fight, The Notorious one needs to revert back to the more fleet-footed, bouncy karate style that served him so well in his featherweight career. We all know the Irishman doesn’t like to wrestle. But, to beat an in-form Poirier, who is coming into this trilogy bout as the slight betting favorite, McGregor will have to risk the occasional kick and the risk of being taken down that goes with it.

Poirier doesn’t need to do much different from the first fight. He will need to avoid Conor’s power, as we’ve all seen him struggle to eat the left in both fights. But, mostly, it’s business as usual for the Diamond – chop the leg, threaten the takedown, and retaliate with heavy hands when McGregor grazes his chin.

Honestly, anything could happen in this fight. But here in the FB office, we collectively agree that Poirier is the hungrier fighter and that’s why we’re tipping him to get the job done again – Poirier by TKO via ground and pound in the third is our bet.

Don’t just take my word for it all. Click here to read Felicia Spencer’s picks on the Dave van Auken show.