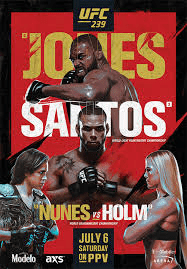 UFC 239 is live tonight from Las Vegas , Nevada with the main card staring at 10pm est.  This card is loaded with potential fireworks to extend your 4th of July weekend.

Round 1:  Deigo rushes to the center of the octagon to clash with Chiesa. They both exchange jabs and faints. Deigo shoots a far singoe and wrestles with Chiesa. The round progresses with exchanges from both fighters but Michael begins to impose his will on Diego with wrestling and getting the best of the scrambles and ending the round of top of Deigo.

Round 2 and 3: Both of these rounds were dominated by Chiesa’s supberb wrestling and top pressure. He easliy held Deigo in check for all 3 rounds and showed that he is a force to be reckon with in the welter weight division.

Round 1: Rockhold comes out slamming kicks on Jan. High kicks body kicks and legs kicks. After a few exchanges Rockhold decides to shoot and pressure Jan against the cage and attempts to get this fight to the ground. They battle in the clinch for about two minutes until Jan can land a solid elbow and get separation. With about 15 seconds left in the round they get in one last exchange with Jan connecting on a right hand and then a head kick at the bell that leaves Rockhold visibly hurt.

Round 2:  Rockhold comes forward hard with punches trying to say as if he is not hurt a dazed still. They get back to clinch and Luke presses hard for a take down. Nothing working in Rockhold’s favor when it comes to getting this fight to the ground. Jan stifles all attempts and gains separation and lands a huge left hook that flattens Luke. Jan follows up with a few unnecessary punches.

The Peoples Main Event, Jorge Masvidal vs Ben Askren in the welterweight division:

Round 1:  Nunes and Holy meet in the center and begin to exchange jabs and judging distance and giving each other the respect thats due. Holy seems to be a little more jittery then Amanda but is still finding her range with some light punches and some chopping side kicks to the leg. Nunes start to load up on some punches and misses the target. But she is starting to find her rhythm. Amanda sees something she begins to smile and land some more strikes. Then boom big rear leg head kick lands for Nunes and follows up with punches until the ref steps in and ends it.

Round 1: A great opening round for the challenger Santos, he landed some heavy keg kicks. Jon Jones controlled the octagon and pace, very tough round to call.

Round 2: Another great round by both men, very exciting fight. Thiago Santos seemed to hurt his foot or knee halfway through the round. Razor sharp round to call, wish we had a Scoreboard!!

Round 3: Back & Forth we go, leg kicks, spinning elbows and heavy lefts. These men are throwing everything we got. Really looks like Santos knee is very hurt.

Round 4: The UFC calls them the championship rounds, we call them the Jon Jones rounds. The greatest champion the UFC has ever seen was dominant in round 4. Santos knee looks destroyed but the man has all heart.

Round 5: With Santos being hurt, it was a tough round to watch. Jon Jones stalked his prey to retain his Light Heavyweight Championship. 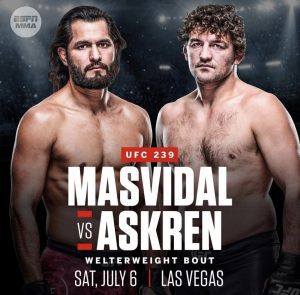