The Path of the Pugilist VOL. 2 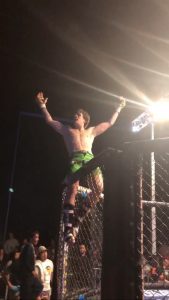 Welcome back to my mini series “Path of a Pugilist”. Since the first piece did well, we decided to make this series and see where this goes. In my previous installment, we took a look into what it was like for my first day in a new gym and the events that transpired. This time, we are going to analyze the events leading up to my first Mixed Martial Arts contest.

I always knew I wanted to compete in MMA and even in boxing. Since that first day in the gym I had obsessed over bettering myself everyday. That was my goal, regardless of being in the gym or not, I would learn at least one new thing every day. Not only techniques, but something to better my mind as well. I feel that the mental part of the game is overlooked despite its importance. It is my belief that you should analyze how you think just as much as your movements.

Something I definitely took for granted at the time was doing double time with high school wrestling as well as training for MMA. I can definitively say that there is no better endurance work than drilling for my highschool team. Along with this, my confidence in my wrestling was soaring. This allowed me to focus almost solely on my boxing as well as some kicking techniques. I was and am blessed to have had the coaches I’ve had in my life, particularly for MMA and wrestling. A seemingly perfect synthesis between the no-nonsense grind and just having fun. I will always be grateful for every person that has set time aside to teach me something.

Another key in having my first fight is the time I spent before ever competing. If my memory serves me it was roughly a year and a half from my first day, to my first fight. I always have faith in my coaches in telling me when I am ready to compete. If I could offer a word of advice to any aspire fighters, I would say don’t rush in. Despite my athletic background, I was set to marinate in a plethora of skills in order to cultivate any kind of success.

On to the meat of this article, my first fight. Following my highschool graduation and the end of my wrestling “career” I was offered a fight by one of my coaches. I recall accepting immediately. I thought of this as the beginning of a new chapter of my life, and in some ways it was, but it was a lot different than I had expected. One thing I need to get out of the way is the idea of “training camps”. At the amateur level, you should not have a training camp. By no means should you take extended periods off from the gym. At this level, you should be in the gym all the time grinding and getting better always. The only thing that should change is the diet for the weight cut. Now that I got that off my chest, let’s crack on. I like to pride myself on training hard, so the leadup to the fight was grueling. Something I’ve had the misfortune of learning is that you never go into a fight at 100%. That just comes with the territory of this sport. That being said, I felt very good going in. Both physically and mentally I felt ready for this challenge.

The actual event itself was completely foreign to me, I had no idea of how ammature shows ran, I actually recall asking my coach on the way to the weigh ins “So is there going to be a stage or something” thinking it would be like a UFC event . He laughed at my foolish question and told me the truth, that we would walk into this room full of the fighters, fill out some paperwork, step on the scale and see a doctor. No glitz and glamour yet (in my defence, for my second fight we actually did get announced and weighed in on a stage). As far as the weight cut itself, it sucked, but they always do and always will, it’s just part of the game. There’s no sense in complaining about it.

Now the fight. People always tell you that you’re going to be incredibly nervous and it’ll seem to go by in a flash. I personally would like to refute that. I remember being very calm and feeling great while I warmed up in the back. So much so that I was actually worried that I wasn’t nervous. Just to contradict even more, I did and still do remember every sequence of a fight, if anything, I felt like I was in there forever despite my fight ending in the first round. Walking out will always be fun, so long as the Dj doesn’t mess up your song while you’re walking out. I like to think of the moment as like the ‘calm before the storm in a sense’. After the announcing of our names and gym respectively, things started off pretty grim, I was hit by the toes of a head kick in the first exchange. I caught a kick than dumped him to the ground, but let him up. Some other exchanges happened before I caught him clean with a left hook. I noticed him buckel and I had decided I would put the pressure on. A mistake many fighters make is rushing in, too eager for the finish. I decided to keep my range and smother him. I kept him at the end of my strikes and had him on the retreat until he hit the fence. At this point he was hurt badly, I could hear my coaches calling for me to strike the body so I did, until I saw an opening for a straight right that dropped him. I covered and landed a few more strikes on the ground but that was that.

Now, I know that I said I remember the whole fight and I meant that. This is not the case for the celebration, I have no clue what I did immediately after the fight and this still holds true for most of my future fights. I think I can safely say there is no feeling like winning a fight especially getting a finish.

At the end of my previous article I stated that my first day in the gym had me hooked. I meant that… I was hooked on training. Though after this, now I became really obsessed.

A little postscript note: Don’t take this article as a way of bolstering my ego. When I say that I wasn’t nervous I truly meant it. That being said, I didn’t say I was devoid of doubt. To this day I have doubts about myself for fights. You just have to find your own way to conquer it. What works for me is I like to work as hard as I possibly can so regardless of the outcome I will put forth my best effort and put on a show. There is no shame in a loss. A quote to leave you off with is from my highschool wrestling coach. (this is from memory not exact words)

If you can look yourself in the mirror honestly, and say “I did everything I could to be the best I could be”  regardless of the outcome, you should be proud.