The Greatest Fight Ever!

A couple weeks ago, I received a phone call asking me to come to a private event involving fights and Jorge Masvidal, so of course I said “yes” without knowing any details. I arrived at an undisclosed location and an epic event unfolded before me, which you can now see when you sign up at GamebredFights.com

While the event was amazing, the standout fight was jaw dropping, as in my jaw literally dropped several times watching as Fidel Paulino and Juan Alvarez fought in a bare-knuckle MMA fight. These two men are some of the most gifted amateur fighters in America and each have a devastating killer streak in them. I knew we were in for a treat, however, even I couldn’t predict that we were going to witness the most insane and savage fight in history.

“It was a crazy and an eye opening experience,” said Juan “Wild Child” Alverez, when I had a chance to catch up with him after this impressive event.  He also mentioned, “Not a lot of men have the courage to get up in there!” 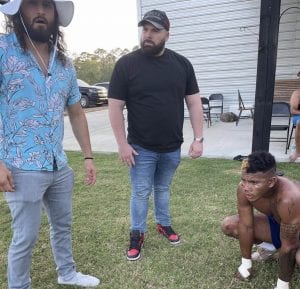 Fidel Paulino’s last fight was in February under the Island Fights banner, where he scored an 11-second TKO against a very game opponent, Anson Swindle. I was on the commentary team and I knew we were witnessing something great. Fast forward, to the bare knuckle MMA fight in front of the “BMF” Jorge Masvidal, and we were on pins and needles awaiting this see this war unfold.

I recently asked Fidel his thoughts on the soon-to-be historic fight and he replied, “Juan fights at 155 and I fight at 145. We didn’t fight before because he can’t make my weight, so this is how it had to be done. I took out a larger man who resorted to trying to take me down after feeling my hands.” I asked Fidel for one last quote and he simply replied, “Nobody can stop me!” 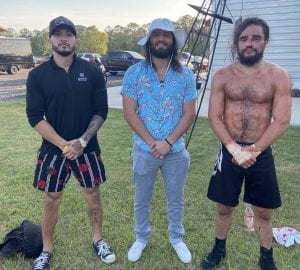 When leaving the fights, I joined the party bus filled with big names in the fight game and all we could talk about, including Masvidal himself, were the performances by Fidel and Juan. Former UFC star, Brok Weaver, told me that this fight was “the greatest fight he has ever seen in person.”

Hopefully, both men know they put on a fight that will live on forever, and you can watch it right now at Gamebredfights.com

In closing, I would love to take this opportunity to simply say to Fidel Paulino and Juan Alvarez Jr., “THANK YOU!”