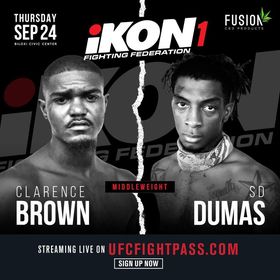 A middleweight matchup between experienced amateurs, SD ‘The Reaper’ Dumas, and Clarence ‘The Prodigy’ Brown has been scheduled for the inaugural iKON Fighting Federation on September 24th. – from the Biloxi Civic Centre in Biloxi, Mississippi. The event will be broadcast on UFC Fight Pass. Pensacola based all-rounder, Dumas will make his first professional appearance […]

SD Dumas remained unbroken at Island Fights 59 which he was in the Main Event vs Heath Herndon. SD walked into the Pensacola Bay Center as the undefeated amateur Island Fights Middleweight Champion. SD Dumas a top amateur prospect will now transition into being a professional with one goal in mind, UFC Champion. SD has […]

SD Dumas comes on the Fight Bananas Podcast. Dave talks about how the summer 2019 is the summer of SD Dumas. SD talks about his training with Roy Jones Jr., signing with First Round Management, the Jon Jones comparison and so much more! Follow SD Dumas on Instagram @SD_Unbroken_Dumas Follow Host Dave Van Auken on […]