It appears the working relationship between former two-time UFC light heavyweight champion, Jon Jones, and the promotion, particularly the UFC’s president, Dana White has hit the rocks once more — as the former campaigns for a sufficient payday to stand opposite recently-minted heavyweight champion, Francis Ngannou this summer.

Off the back of the above-mentioned, Ngannou’s spectacular crowning achievement against Stipe Miocic over the weekend at UFC 260, promotional leader, White joked that if he were Jones sitting at home watching Ngannou’s performance, that he would consider testing middleweight waters rather than even following through with plans to make a heavyweight debut this summer.
Taking exception to White’s tongue-in-cheek claims, Jones asked why he would consider avoiding the heavyweight ranks, having spent the majority of 2020 preparing for a move to the division in line with a strength and conditioning regiment.
In a series of tweets, Jones responded to White who told the Rochester native to call Hunter Campbell right away if he was serious about clashing with the devastating Ngannou in a summer divisional debut.
Questioning why the promotional leader would imply he was fearful of a potential outing against Ngannou, Jones claimed that if he were to fight Ngannou, he would need to be compensated fairly by the promotion, and if they didn’t come to the table with a sufficient deal, he would step aside in order for the UFC to book a heavyweight title rematch between Ngannou and surging knockout-artist, Derrick Lewis.
This Monday afternoon, Jones has tweeted and deleted some statements aimed at the UFC and the aforenoted, White, asking for the organization to “Just f*cking let me (him) go.“
Seemingly open to bringing his talents elsewhere, Jones claimed it was obvious that White “hated” him; “What type of weird sh*t is this, obviously the boss hates me. Let me take my business elsewhere.“
In a final tweet, Jones claimed that he was finished attempting to be great for other people in his life, and how there was nothing “great” about being “taken advantage of“. “I’m not trying to be great for other people anymore, I’m trying to be great for myself. There’s nothing great about being taken advantage of.“ 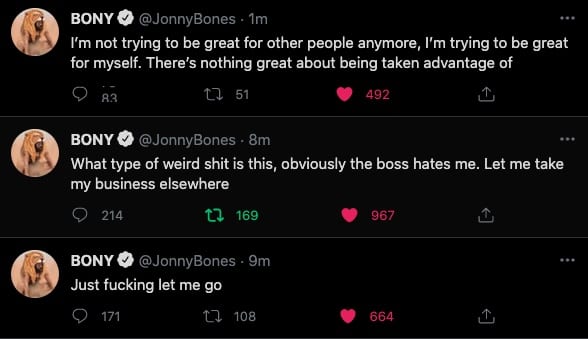 Whilst his fighting future, particularly immediate is unknown off the back of this evening’s outburst, the former two-time light heavyweight champion scored the final defence of his second reign in the main event of UFC 247 last February in Houston, Texas — taking home a close unanimous decision victory over the then-undefeated challenger, Dominick Reyes in his most recent Octagon appearance.
The promotion and Jones were involved in some rather public negotiation fallouts last year as well, when White infamously claimed that Jones was looking for money similar to what Deontay Wilder had received to tackle Tyson Fury, for a heavyweight bow against the aforenoted, Ngannou.