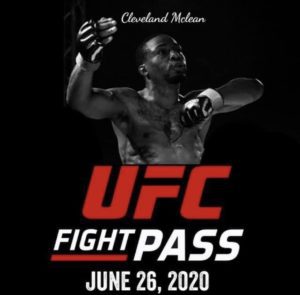 This Friday live on UFC Fight Pass, Cleveland McLean reruns to the cage to fight for Titan Fighting Championship however, Cleveland will be fighting for something more.

Dave Van Auken: What does fighting on Titan FC mean to you?

Dave Van Auken: What can people except from you at Titan FC 61?

Cleveland McLean: You can except for me to be in Victor Dias face the whole time, and finishing him.  I can’t see this fight going past the 2nd round period.

Dave Van Auken: How has been your training for this fight through the Corona Pandemic

Cleveland McLean: I have a gym at the house, I had a couple people over to train and stay in shape ( I trained with the same 3-4 guys everyday in the corona pandemic)

Dave Van Auken: Would love your honest thoughts on last couple of weeks on social injustice..

Cleveland McLean: I honestly feel like enough is enough! I just want things to change so when I have children, they don’t have to deal with the things I had to deal with from working for company like creative concept of Orlando, which is located in Longwood.  Where they literally pay white people more money,they treat them better and have better opportunities. I honestly grateful for working there because if I wasn’t being treated wrong, I would’ve never had enough courage to quit my job and start working full time. I honestly just wanted to be treated equal like everyone else.  Let me show you I’m a good person or a good worker before judging me and thinking I’m a bad person or a worker because of my skin color

Dave Van Auken: What does black lives matter mean to you?

Cleveland McLean: Black lives matter means we’re are people just like everyone else. We want to be treated equal just like everyone else.  People love bringing up black on black crimes which don’t even exist because first you only hear that about black people and you don’t hear that about other race.  Second people fail to realize that when a black person kills a black person, someone going to get charged.  But when a cop or most times when a white Person kill a black man he don’t get charged.. We ( black ppl ) literally have to burn stuff down to get people charged for murder.  Even if they have a video, which should be a open and shut case, it normally don’t happen that way.

Dave Van Auken: Do you feel a responsibility of fighting on UFC Fight Pass and bring attention to black lives matter..?

Cleveland McLean: Yes sir, I can’t sit at home or behind my phone and post about change without actually doing the physical part. I honestly wish I could do more than just wear a black lives matter shirt.  I really would like to get into politics like Manny Pacquio so I can make some real changes, that’s my goal anyways ..learn about politics!

I want to thank Cleveland McLean for his time, Cleveland will try to capture a statement win for his professional Mixed Martial Arts career however more importantly Cleveland wants to make a statement on Social Equality.