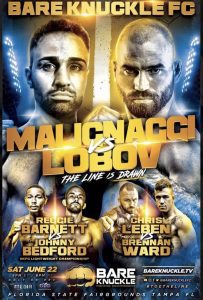 Here we go folks the bare knuckle fight of the decade is going down tonight in Tampa Bay , Florida. The line is drawn and BKFC 6 is going to be fantastic. Stay tuned for all the live updates from the main card leading up to this epic showdown between Paulie Malignaggi and Artem Lobov. Or if you prefer MMA vs boxing.

Round 1: First round in the books mostly clinching and some body shots exchanged nothing really going for either fighter, Paulie kept the center better but Artem Landed the one shot that was the cleanest tough tough round to call.

Round 2: Each man comes out with hesitation but still pumping a jab and trying to find that opeing to land something significant. Both men respecting each other a power and skill but Artem seems to be the head hunter whjile Paulie goes to the body with his jab. Another tough round to call.

Round 3: Much like the first two rounds this one was another chess match were each man landed some shots but Artem seems to picking up the pace and landing a bit more then Paulie. I give this round to Artem.

Round 4: Artem comes out aggressive and ready to bang. He starts taking a shot to give ton clean back. He lands what turns out to be the nost significant strikes in the fight during this round. Artem takes this round for sure.

Round 5: The fifth and final round comes and goes like the first three. Paulie moving and trying to land point shots not power and Artem was walking him down trying to land big shots. This fight turns out to not be the war we hope for but a great show none the less.

Artem Lobov is the winner by Unanimous Decision.

Round 1: Is action from the start. Both men slanging bombs trying to take each others head clean off. Bedford calls for Barnett to toe the line and stand and bang with him. First round has furious pace which nets Bedford two great knockdowns in the first could call it a 10-7 round for Johnny.

Round 2: Barnett stakes his claim early in this round and starts to put together some combos and get Bedford on his back foot for most of this 2 minute period. Give this round to Barnett but he is gonna need a few more to win a decision.

Round 3:  The pace starts to slow a little but both men are still giving it there all and throwing with bad intentions. Johnny gets another knockdown this round making that 3 in the fight. Johnny takes this round clearly.

Round 4: Barnett comes out with a little more energy then Johnny and keeps this going for the majority of the round. But both men land a even number of shots nothing really hard or fight changing. Reggie steals the 4th from Johnny

Round 5: Both men are exhausted and still trying to knock each other block off. You couldn’t ask for a better light weight final. Both these warriors leaving all on the line. Johnny Bedford takes the fifth and final round along with the tournament championship belt.

Round 1: Julian Lane comes out aggressive and heavy handed looking for a brawl right off that bat. Get two knockdowns in this round but ref calls one a slip. Ethier way its a 10-8 round for Julian Lane.

Round 2: Julian comes out motivated and ready to go again, looking for another knock down or finish. Julian presses forward on the action and tries to land that big left like he did in the first . Thomas ans seemed to find his footing now and starts to land some punches of his own and build some confidence back in himself. Both men are game but I give the edge to Lane in the second round.

Round 3: More of the same from the second, Thomas starting to build slowly but Lane doing just enough to keep the fight in his favor. Better round agin for Thomas but not enough to take it. 3 rounds to Lane.

Round 4 : Thomas gets it going this round and starts to land some big shots on Lane and presses the action the whole round. He sees Lane starting to fade and takes the fourth round for his own. 3 to 1 Lane now

Round 5: Lots of action in this round like you would hope for but Lane lands most of the cleaner shots and takes this round and the fight 49 to 45 on all 3 score cards. Lane wins

Round 1:  Both men look like they are ready for a war. Good clean action in the first mostly jabs landing for Campbell but the aggressiveness goes to Beltran in the first. This is a toss up round. Both fighters try to implement there game plan and nothing really going either way.

Round 2: Beltran comes out a lot more determined and ready to bang. This pays divot ends for Beltran who in a wild exchange clips Jamie and drops him. Campbell gets up in plenty of time and begins to fight back immediately. But Joey proves to be to much and pours on more power shots from the clinch and after two huge upper cuts he drops Campbell back to the canvas, Jamie gets up barely before the 10 count, but the ref doesn’t like what he sees and waves off the fight giving Beltran the KO in the second round

Round 1 Evn Action from both men Joe lands the cleaner shots , nothing spectacular in that round. I have Joe up 1 round to 0

Round 2: Round alot of the same from both men. Each landing pop shots and moving out of the way of most of the punches. But Walber lands a hard straight right to Riggs chin and drops him at the end of the round. Joe is up quick and insists he is fine and the ref sees it the same, Bell rings end of the Second. Walber takes that round for sure.

Round 3:  Walber comes out and presses the action all round with Joe clinching and trying to weather the storm does a good job. Doesn’t take much damage at all but the forward pressure and volume from Walber wins him that round. 2 to 1  Walber

Round 4:  Joe Riggs comes out determined to change this fight in his favor and does with a big right hook that hurts Walber and makes him start to back up and touch his face. Joe senses this and presses the action.  He lands a few more power shots this round but nothing to drop Walber.  Joe takes the 4th round and ties this up 2 to 2

Round 5: Both men toouch hands and dab up before the final round of this fight.  Much like the first both men mopving and trying to find an angle to land that one punch but Riggs seems to be doing just alittle bit more to steal this round.  thats 3 to 2 Riggs, but lets not forget the knock down in a close second round. That could have been a 10 -8 round for Walber

Official Decision: Unanimous draw all judges see it 47-47 for a draw.

Round 1: Both men come out to the line and exchange quick punches. Brito slides back and starts to circle to get his range and rhythm. Though this doesn’t seem to matter as Jim presses forward and wants action. After a few exchanges in the clinch Jim lands a devastating left hook on the button. Brito goes down hard face first and isn’t getting up after that folks. Huge KO victory in the 1st round by Jim Alers

Round 1:Both men come out swing Mundell working his right jab from the southpaw stance trying to gauge his range. Lipton circling to his right hoping to find the timing. But after a couple of clinches and exchanges the power of Mundell proves to be to much for Lipton who gets dropped twice in this first round and doesnt get up after the second. Mundell wins by KO in the first round. 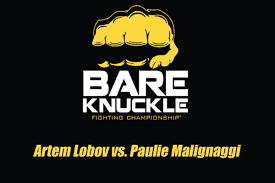