5 Reasons WHY you have to watch UFC Vegas 25 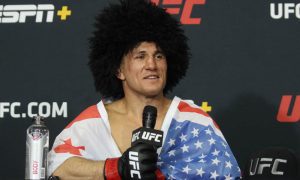 In the main event of UFC Vegas 25 we will see a pivotal light heavyweight matchup between Ex title contender Dominick Reyes and upstart Jiri Procházka. Both men highly ranked in the division and could be only one win away from a UFC title shot. Will we see Dominick Reyes recapture his spot back as a title challenger or will we see a brand new challenger in Jiri Procházka?!?

Fan favorite Cub Swanson will enter the octagon in the co main event against Giga Chikadze for his 39th professional fight! Cub Swanson has been putting on phenomenal performances since he debuted in 2004. Cub Swanson still a very high level fighter and is now taking on the next generation. However, Cub has been through multiple wars and serval severe injuries and we all know in the fight game you never know if there is a tomorrow..?

Per the UFC’s Instagram Page they made a post highlighting one of Sean Strickland’s recent fights. Let’s just say Sean might takeover Kevin Holland’s nickname “Loud Mouth”. Sean Strickland put on a striking clinic but, he also put out a trash talking clinic as well. Sean Strickland was yelling and talking smack to his opponent, will we see it again when Sean takes on ultra tough Krzysztof Jotko.

I believe Lomo Lookboonmee is one of the most underrated fighters on the roster! Loma looks to make a statement in the female strawweight division when she takes on Sam Hughes.

Merab Dvalishvili verse Cody Stamann is the dark horse fight of UFC Vegas 25. Cody Stamann comes in with a 19-3 record fighting some of the biggest names in the division. However, Merab is coming into the fight riding a 5 fight win streak with some impressive wins on the way. Merab can make a humongous impact in the UFC’s bantamweight division and could one day be a challenger to the UFC title holder. This and so much more goes down Saturday night at UFC Vegas 25!