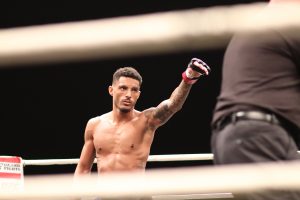 Fighting out of Fusion X-cel performance in Orlando, Florida, “The Lion” Lucas Alexander has now jumped on a 2 fight win streak at Island Fights, watchable on UFC’s Fightpass. Lucas is a 5’10 natural featherweight, however is ranked top 100 in the South Eastern United states in both Lightweights and Featherweights.

Question 1-
How long have you been training in martial arts and what got you into it?
I started training at around 13 to 14 years old, I did 8 months of Muay-Thai and then quit to start focusing more on soccer! I was constantly switching between sports and one day my mom told me that I always started things but never finished them. This was something that stuck in my head and when I turned 15 I came back and started training kickboxing! I originally started training because I wanted to gain more muscle, I was so skinny and could never gain weight lol. After training kickboxing for a couple months I made a promise to never stop and have stuck to it to this day and couldn’t be happier.
Question 2-
What is the most memorable story you have training at Fusion X-cel Performance?
Every moment in my second home is amazing, I really feel good about fusion! I’ve trained in several gyms, lived in other countries, visited several places and nothing compares to fusion. But the best memories I have were from my first weeks here. Coming to live in another country is intimating but not speaking the language made it even more scary. Everyone apart of the fusion family welcomed me with open arms and I couldn’t be more grateful. It is a blessing to be in America, training with the best coach and with the best teammates! I have been at fusion for 11 months and it is amazing to see how much the gym has grown in a short time. This is definitely the result of a great job done by Julien Williams, Edwin Carmichaeland Pete Zakhary! Julien is one of the best coaches in the world and to be coached by him is an honor… I see fusion at the top in a few more years!
Question 3-
How would you describe your fight style to anyone who has yet the opportunity to see you perform yet?
I feel like my style is very unique. You might see some grappling and maybe some wrestling but you will always see someone comfortable on their feet throwing punches and kicks that you’ve rarely seen before. You will always see a different way of moving, a speedy force with my striking, uncommon kicks and combinations and I always put a show on. I like to have fun in my fights and feel at ease during these moments. You might see a little Naruto and a Dragonball Z mix in my technique as well lol. Fighting is like walking or breathing to me. I don’t need to think about it, it’s something that comes naturally.
Question 4-
Congratulations on your most recent victory at Dean Toole’s Island Fights, televised live on UFC’s Fightpass. How does it feel to be able to fight on such a huge platform?
Thank you brother! I am very grateful of islands fights for giving me this opportunity and especially to Dean for always welcoming me. It means everything to me to fight on such a big platform and to show my skills to not only the people who travel to watch the fights live but everyone else who streams it on UFC fightpass as well. Everyone treats me so well from this organization and when I move on to an even bigger platform I will never forget where I came from.
Question 5-
What is your favorite recipe including bananas? #howdoyoubanana
Honestly my go to snack after training is Andstill protein, a scoop of peanut butter and a banana! Shout out to the best sponsor for making this happen lol 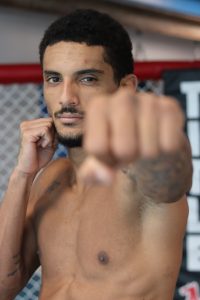