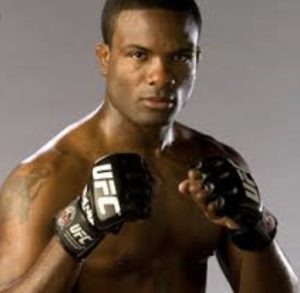 Din Thomas is could go down in history as one of the largest contributions to the UFC. Din Thomas had some epic fights in the early days of the UFC against one day UFC Hall of Famers. Also, Din Thomas was on the ultra popular show the “Ultimate Fighter” where he used that platform to catapult himself back into the UFC. After his fighting career Din transition into one of the great coaches in the game, where he mentors some of the best fighters in the UFC. With Din’s knowledge and personality he is also on the hit show on YouTube “Dana White Looking for a Fight”. Din has gave his life to Mix Martial Arts and for that the UFC Universe will always be grateful, here are Din Thomas 5 questions!

1. You have seen & done it all in Mix Martial Arts, what is one of your favorite MMA stories?

Din Thomas: Jamie Levine threw a WEF show in Stuebenville, Ohio like in 2003 or so.  American Top Team was small back then so Dan Lambert would fly the whole team on a private jet.  Renato Tavares was fighting some wrestler from Ohio. Middle of the fight, dudes start talking trash to our corner.  Big fight breaks out, Frank Mir slugging people, I believe Wade Rome got hit with a flying chair, some dude got his arm snapped.  It was wild. Meanwhile, I had just got knee surgery so I was in the back watching…

On Crutches laughing my ass off!!!

2. What is a better feeling for you, winning as a fighter or a coach?

Din Thomas: Winning as a coach is more fulfilling currently. As a fighter, when you train hard and are well prepared, I knew I could win.  I’d do what was in my power and I could control that.  As a coach, there’s only so much control you have.  You do your best to prepare the fighter and hope it comes together for them.  When they execute the way they are suppose to and everything comes together its a beautiful moment.

3. If you had to build a Mix Martial Artist from the bottom up, what technique would you want him or her to learn first?

4. Someone with 26 professional wins, which one is special over all the rest?

Din Thomas: Mishima in Japan. I was losing really badly. I had never up to that point in my career been dominated that way. Being able to dig deep, under the lights, and come back and win felt good. I learned alot about myself and adversity.

Din Thomas: A Contender. Gillian is a young fighter. I’d like for her to have a long, illustrious career. I’m not looking to push her too fast.  She still works hard every day. She is still learning every day. She drills the little things like no other fighter I have. When its time for her to fight for a championship, I dont want her to have any holes. So we will continue to work diligently and patiently until her time comes. 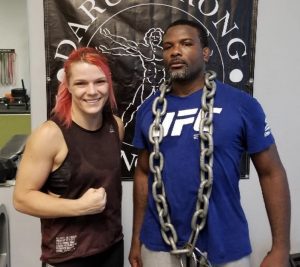