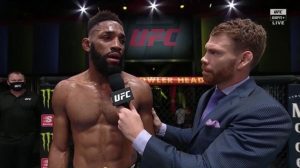 ​A Fight Bananas favorite, Phil Rowe secured his first victory in the UFC cage in impressive fashion. It’s been seen on super-fight cards in BJJ that the “Fresh Prince” has phenomenal jiu jitsu, and as he noted he is more comfortable there, but he showed that he has the power to shut the lights out. He beautifully used his range and nasty knees to put away a tough opponent in Orion Cosce, a fellow Contender Series Graduate. I think a fight against Matt Semelsberger would be a good step against someone with a similar record; the majority of “Semi the Jedi’s,” wins come by knockout, and we could see Rowe’s ground game come into play.

​The odds for this fight were pretty close heading into the start, and the fight followed what was predicted. It was a very tight fight between these two featherweights. Kamaka was making progress with the calf kicks and Chavez was game. Then in round two, Kamaka had a point deducted from committing two fouls, and this led to a majority draw. I would like to see these two run the fight back and get a final result.

​It was all aboard the “Nite Train” this past Saturday night in Las Vegas. Jared Gooden, a former Island Fights Veteran, tucked in his opponent Niklas Stolze with a solid right hand to secure his first UFC victory. Jared has had some very tough opponents in the UFC, especially with his debut against the grizzly vet in Alan Jouban, but I feel like Gooden has definitely grown in spades from those fights. I think a fight against Kenan Song, who is 4-2 in the UFC and 16-6 overall, would be a fun one. Both these fighters are well rounded with the majority of wins coming by a finish; I feel like it could be a sleeper for a fight of the night and more than likely wouldn’t see all three rounds.

​Cheyanna Buys made an electrifying bounce back from her loss in her UFC debut by a beautiful head kick followed up by nasty ground and pound to secure the ko/tko. It was a quick one and I am sure she is ready to bounce in on short notice if need be, but if not, I think a matchup against Miranda Granger would be a good step forward. Both of these women are early in their pro careers and they would be a good test for each other. 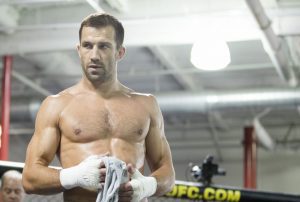 ​Sean Strickland will crack the top ten on Monday when the rankings are updated. He went in against the striking phenom, Uriah Hall and imposed his will from the jump with some heavy forward pressure and a ton of output on the feet. This seemed to take Hall out of his game completely and Strickland just kept it going for all 5 rounds. With all of the other fighters in the top ten of the middleweight division having a fight booked or in the workings of being booked there seems to be one interesting matchup left…. The former king of the division, Luke Rockhold. Rockhold has been aiming a return to the division and wants a top ten opponent or someone that will get him excited, and Sean Strickland fits both those descriptions. I’m sure the lead up to this fight would be filled with talk back and forth and then follow up with fireworks and more than likely, a finish in the fight. Make that a main event fight night and sign me up please!  ​