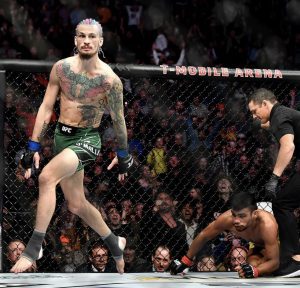 ​The Suga Show is still good to go. The man named Sean O’Malley keeps the hype train and the ball rolling with a nice 1stround tko over Raulian Paiva. O’Malley has really built a brand and has the hype of the public, whether it’s mma fans or just a casual observer of the sport. He has some pretty beautiful knockouts, but it is obvious that his level of competition isn’t as high as other people that have fought in the UFC. O’Malley is starting to reach a time in his career that the competition isn’t going to get any easier, and he’s already had a little back and forth with another hot prospect in the division, Adrian Yanez. Yanez is a very smooth and technical striker with absolute dynamite in his hands. He reminds me a lot of a smaller and younger Jorge Masvidal. Yanez is a great personality as well and has a solid social media presence also. Sean also said that he thought that a March fight with Yanez would be good as well. I feel like this would really highlight both men and the winner will be snatching a spotlight that not too many people get. Even though these guys aren’t ranked, I would love if this was a UFC Fight Night!

​Stop sleeping on the flyweights! All the hype in Kai Kara-France’s fight was focused on the former bantamweight champ, Cody Garbrandt, and how he was going to perform. Honestly, I didn’t hear any attention on Kai going into this fight. Boy, did Kai shut the “No Love” train down this past Saturday night. Kai uncorked some absolute missiles to put Cody away in the first round. He improved to 6-2 in the UFC and he called for a title shot, but I still feel like he’s a just a couple fights away from that. A matchup with Matheus Nicolau seems like a great next step. These two are both moving towards the top of the division and are solid prospects. I really think the winner of that fight will get a crack at the top 5 of the division and one step closer to a title shot.

​Geoff Neal got the job done with the unanimous decision on Saturday night. Neal was able to shut out the outside distractions leading up this fight and perform beautifully in his first fight back since his loss to Stephen Thompson. Neal isn’t much for calling his shot and is willing to take pretty much anyone, and I think that he should matchup with Michael Chiesa next. Chiesa is coming back off of two losses to some stiff competition and Neal would be no easy challenge to handle on the feet. It would also be a nice test to see how Neal deals with someone who will be constantly looking to take him down and looking to submit him any chance he gets. 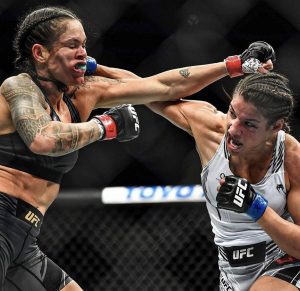 ​She really did it; Julianna Peña was able to climb the Mount Everest and shock the world. After a rocky start in the first round and getting controlled by the former champ, Peña was the rock that Nunes broke herself on. She was able to land some solid shots on the feet, gas out Nunes and submit her in the 2nd round. Nunes didn’t seem her like her same lioness way this past Saturday night and said the she had just checked out. I feel like the automatic rematch is the most logical thing to do since Nunes is considered the women’s GOAT of the game. It would be a chance to see if Nunes was out of the ordinary compared to usual or if Peña just has her number. Either way, this would be another exciting fight the second time around.

​Are you a believer now? Charles Olivera hopefully has wiped the doubts in your mind and has solidified himself as the king of the lightweight division. Olivera was able to weather the damage of Poirier’s strikes in the first and secure the RNC in the 3rd round. There was a lot of people who felt like Poirier was the uncrowned champ of the division, but Olivera went and nipped that in the bud last night with the submission win. Olivera is truly coming into his own and only continue to keep getting better with each fight. There is definitely not a lack of challengers for the king from Brazil, with killers that are chomping at the bit at their shot. It’s already known that the most violent man in the division, Justin Gaethje, has set himself up for the next shot at the title. Talk about another barn burner of a fight! I really don’t see this going to a decision and expect this to be another phenomenal fight. 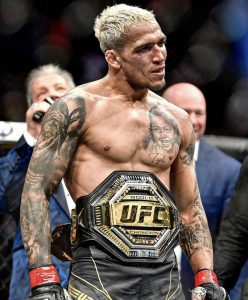