​What a finish for Marlon Vera this past Saturday night over the tried and true veteran, Frankie Edgar at MSG. Vera hit a beautiful front kick to put Edgar face first into the canvas and to get the job done in the 3rd round. Vera has now made it two in a row since dropping a decision to Jose Aldo and is seemingly coming into his own in the division. Vera has been around for a minute now in the UFC and we’ve watched his game grow constantly into a better fighter each time. Is it Chito’s time? Well how about testing him a little more by giving him the winner of the UFC 269 matchup Munhoz vs Cruz? This would be a logical step forward both in rankings and in competition, truly testing Vera and seeing where he’s at. 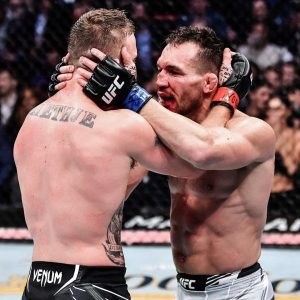 ​There are fights that don’t live up to the hype, and then there are Justin Gaethje’s fights. I’m convinced that the day that Justin Gaethje is in a boring fight, is the day the world may stop spinning. The man is just built for this. When Gaethje vs Chandler was announced, everyone just knew that this was a match made in MMA heaven, and it delivered all the violence that was promised. Gaethje looked great in his first fight since losing to Khabib and has now demanded a title shot, claiming, “title shot, or we riot.” Well Dana, you better give the man his shot! There is no one else that is in front of Gaethje for the shot at the strap, and what better challenge to whoever is the champ after UFC 269, than the most exciting man on the roster.

​As I said before, I usually don’t do a write up for the losers of fights from cards, but this is a matchup that just needs to happen. Right after his loss to the champ on Saturday night, “Chaos” set his sights on the one he calls “Street Judas.” Granted, Masvidal is set to fight Leon Edwards, but whether he wins or loses that fight, the one after has to be with Covington. It’s just an opportunity that you can’t pass up; a fight that truly has it all. The story is written better than a soap opera, a fight that has bad blood, and two men that want to deliver the violence to the fans in getting a win in return. If you wanted a new Ultimate Fighter season, here’s your two new coaches. If the UFC doesn’t go the TUF route, all I ask is that they set this as a five-round fight! It’s time to watch the fireworks of what this fight would be. 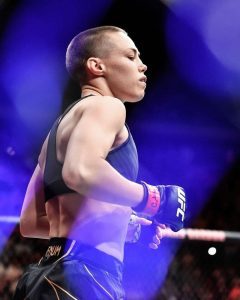 ​Thug Rose remains at the top of her throne after a thriller with the challenger Weili Zhang. Namajunas had a solid back and forth fight with the challenger and managed to pull out the split decision victory to remain queen of the strawweights. Now what seems to be next for Rose is a long-awaited rematch between her and a lady that was the first champ of the division. Carla Esparza has worked her way back to what once was hers and it looks like the champ agrees that she is the logical next fight. It’ll be a throwback to once was but a showing of what is. A definite look at the growth of two fighters that started this division together, and still want to be ruler of it. Much has changed since their first meeting and so have they, so let’s see he has grown more in the rematch.

Kamaru Usman vs Leon Edwards (with win) or Vicente Luque

​Once again, Usman remains king of the welterweights. Another win under his belt in his quest to solidify himself as the GOAT of the division. Usman maintained peace in the face of “Chaos,” and secured the unanimous decision over his heated rival. So, what’s next for the man that is working on clearing out the division? How about the man that has nine wins in a row outside of a no contest? The man that seems to have a title shot allude him, Leon Edwards, finally has his shot. Granted, he now has the obstacle of getting through Jorge Masvidal next at UFC 269, but if he is able to do so, there is no way you can deny him with the next shot at Usman. If he loses to Masvidal, the title shot should go to another guy who has been on a tear, and that would be Vicente Luque, a former training partner of Usman. 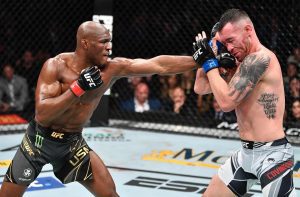